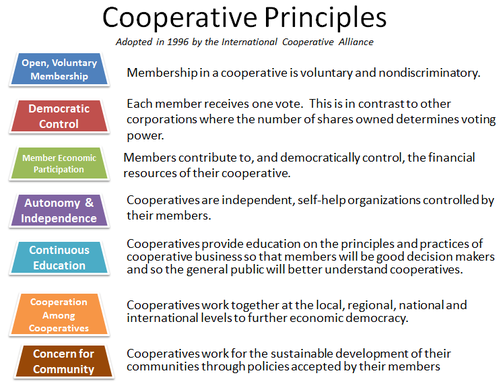 A cooperative, or co-op, is an organization or business which is owned and controlled by individuals within a community or collaborative rather than a single person or corporate entity. There are records of numerous cooperatives throughout history where people began organizing together in an attempt to get more affordable prices for basic goods, housing, and/or services. Today, cooperatives can be found all over the world in the establishment of housing, food, energy, daycare, banks, farming and other various industries. There are many stories and case studies of co-ops being extremely successful business entities and solutions to solving problems in various communities.

With Community Grocery being established as a consumer co-op our goal is to open grocery stores owned and operated by resident owner-members who are also consumers. The idea behind a co-op store is that it works for its members, rather than being an engine of profit. Because no profits are expected, the store can keep wages high and costs low, allowing members of the cooperative to benefit. Co-ops can sell things like groceries, books, and a variety of other consumer goods, and the cooperative concept can also be used in housing, banking, and a variety of other industries.

In a cooperative store, the members of the co-op vote on issues of importance to the store as a collective, rather than allowing one person to make decisions. Members might vote for a wage raise, additional benefits to employees, or the use of a new supplier. Some co-ops also use voting to pass resolutions donating funds to local charities. Many also encourage members to volunteer in the store, or in the local community, with the goal of fostering a positive relationship with the surrounding community. Community events, classes, and meetings may be held to bolster community relations.